Schuylkill River Greenways is hosting the film festival for the first time at the historical Colonial Theatre in Phoenixville, Pennsylvania. Built in 1903, the "Colonial Opera House" became a preeminent venue for movies, traveling shows and live entertainment throughout the 20th century. Get your ticket today to enjoy a collection of paddle adventure films at the historical venue. Theater snacks, a cash bar and raffle prizes will be available during the event.

There are two ticket options available for the Film Festival. Descriptions and prices are below. 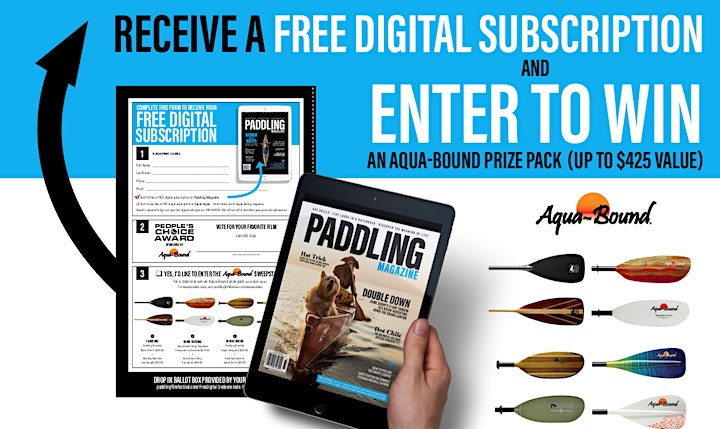 Every film festival attendee receives a FREE one-year digital subscription to Paddling Magazine and a chance to win an Aqua-Bound canoeing, kayaking, kayak fishing, or SUP prize pack (up to a $425 value). You also get to cast your vote during the event for the best film to go toward selecting the People's Choice Award winner.

About the World Tour

Since Rapid Media launched the festival back in 2006, the World Tour has screened 959 times to more than 282,864 audience members. Rapid Media has awarded $71,000 to paddling filmmakers and helped raise tens of thousands of dollars for charitable causes. The Paddling Film Festival World Tour has grown to become one of the largest paddling events in the world. To learn more, visit paddlingfilmfestival.com.